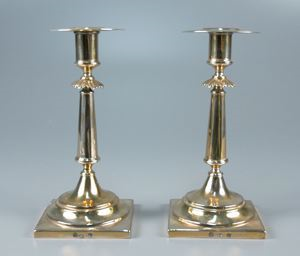 The lighting of two candles marks the beginning of a Sabbath. The circular inserts at the top of these candlesticks are inscribed with names, one of a man, the other, a woman. These may have been engagement gifts, coming from the families of the bride and groom-to-be.

Provenance
Central Synagogue, New York, NY; purchased from them by the Gallery in 2006
Keywords Click a term to view the records with the same keyword
candlesticks
judaica
Additional Images Click an image to view a larger version