Promenade: A Musical Procession Through Paintings at the Memorial Art Gallery 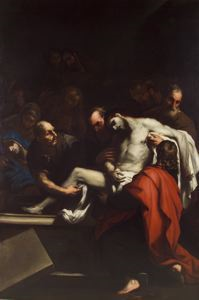 
Originally an altarpiece, this painting illustrates the New Testament scene of the Entombment of Christ, one of the most emotional and dramatic events in the Christian faith. Joseph of Arimathea, who is holding Jesus and clasping him in a shroud, and Nicodemus, who supports Jesusâ legs, are placing him in a stone sarcophagus. Saint John the Evangelist, cloaked in red, is in the foreground with his back to the viewer. Christâs mother, the Virgin Mary, dressed in a blue robe, collapses in despair at the left. She is surrounded by Holy Women, including Mary Magdalene who wrings her hands in sorrow. Other grieving figures in the background of the painting engage each other in conversation, enhancing both the devotional and dramatic character of the painting.

Luca Giordano was one of the most celebrated artists in Naples. He produced a huge quantity of work, including altarpieces, mythological paintings and decorative fresco cycles. Giordano was internationally successful and traveled widely, working in Naples, Venice, Florence and Madrid. This altarpiece was painted early in Giordanoâs career when he was only in his late teens. It shows the influence of the equally well-known and prolific painter Jusepe de Ribera, with whom he may have trained.

Exhibition List
This object was included in the following exhibitions:
Bibliography
This object has the following bibliographic references:
Portfolio List Click a portfolio name to view all the objects in that portfolio
This object is a member of the following portfolios:
Baroque Art
Fountain Court
MAG Favorites
Promenade: A Musical Procession Through Paintings at the Memorial Art Gallery
Web Links See links to web pages and lesson plans
Toccata II per L'Elevatione Excerpt from Girolamo Frescobaldi's Toccata II per L'Elevatione, Op. 10, no.3, performed by Edoardo Bellotti on the Italian Baroque Organ, to accompany this painting.

Your current search criteria is: Portfolio is "Promenade: A Musical Procession Through Paintings at the Memorial Art Gallery" and [Object]Nationality is "Italian" and [Objects_1]Sort_Artist contains "Giordano, Luca".