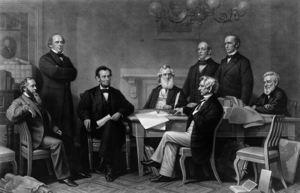 
Full Title:The First Reading of the Emancipation Proclamation Before the Cabinet (after Francis B. Carpenter)
Object Type: Print
Medium and Support: Engraving
Credit Line: Gift of Grant Holcomb in memory of Thomas H. Hawks
Accession Number: 1991.13
Link to this object
Location: Not currently on view


By 1862, many people in America and abroad were impatient for President Lincoln to act on the matter of slavery in the Confederate states. Lincoln knew that emancipating the slaves would be a politically controversial decision, yet he also believed that the time was ripe to take a moral stand. On July 22, the President read a draft of the Emancipation Proclamation to his cabinet.

Painter F.B. Carpenter recognized that this historical event was an important subject for a painting. He lived in the White House for six months during 1864 while he worked on the painting. He used authentic details in depicting the room where the draft was read, and used photographs produced by Matthew Bradyâs studio as a reference for the figures in the painting. Alexander Ritchie later reproduced Carpenterâs work in the engraving seen on view here.

Your current search criteria is: Portfolio is "Lincoln in Rochester".