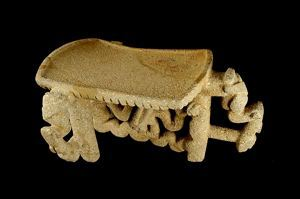 
A metate is a tool for grinding and preparing food. Because of its crucial role in ancient peopleâs everyday existence (see photo to the right) over time the metate evolved into a ritual object. Carved from a single piece of stone, the delicate open work on this flying-panel metate was accomplished by skilled artists using only tools made from stone or wood.

Both real and supernatural creatures decorate the base. The central figure is a shaman in the form of a crocodile. Respected for its power and swiftness on land and in the water, the crocodile is a fitting representation for a shaman.

Metates were also employed as funeral biers in the most prestigious tombs; the body was laid out on two or three metates placed side by side. The more elaborate "flying-panel" examples may have been manufactured especially for high-rank burials.
[Gallery label text, 2009]

Provenance
E. Vargas Alfonso, Decatur, Georgia (dealer?); purchased from him by the Gallery in 1972
Keywords Click a term to view the records with the same keyword
Pre-Columbian art of Central & South America
1000-1400
altars
Huetar
Additional Images Click an image to view a larger version

Exhibition List
This object was included in the following exhibitions:
Bibliography
This object has the following bibliographic references:
Portfolio List Click a portfolio name to view all the objects in that portfolio
This object is a member of the following portfolios:
1000-1400
Ancient Americas
Lesson Plans Using MAG Objects
Objects with Lesson Plans for SS Standards
Web Links See links to web pages and lesson plans
Odyssey Online This site explores the role of maize in the ancient Americas, and shows details of several metates used for grinding corn or beans. Metates such as this one were ceremonial rather than functional.
Odyssey Online Included in an illustrated timeline of the great cultures of the ancient Americas.
http://carlos.emory.edu/ODYSSEY/AA/teacher/articulateobj.htm A lesson plan that helps students engage in an active process of looking, questioning and investigating an ancient object.

Your current search criteria is: Portfolio is "Ancient Americas".