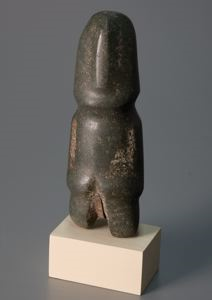 
In Ancient America, a variety of green stones â sometimes called jadeite or jade â were highly-prized, valuable materials. While the types of stones and the actual greenness vary, a symbolic association linked them to water and plant growth. The hard stone was sculpted by abrading it with other stones, which was a slow and arduous process. The durability and strength as well as the attractive, shiny surfaces would have contributed to the overall value of green stone and these celt figures.

This green stone figure is an anthropomorphized celt, or axe-head. The frequency with which the Mezcala people made celt figures with human characteristics can perhaps be explained by the animistic belief that animals, plants, rocks and objects have spirits. The celt was a multi-use working tool that was passed down through generations. Because of its highly-valued role and ancestral connotations, the celt form took on symbolic value in ritual objects, some of which were worn by individuals.
[Gallery label text, 2009]

Provenance
Andre Emmerich Gallery, New York; purchased from them by Mr. and Mrs. Arthur Stern, Rochester, NY; their gift to the Gallery in 1958
Keywords Click a term to view the records with the same keyword
1000 BCE - 500 CE
figures
Guerrero
Additional Images Click an image to view a larger version

Portfolio List Click a portfolio name to view all the objects in that portfolio
This object is a member of the following portfolios:
Ancient Americas

Your current search criteria is: Portfolio is "Ancient Americas".