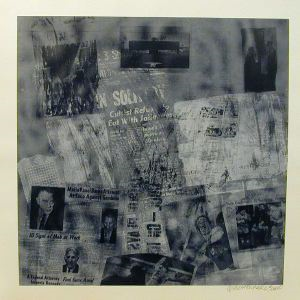 
In 1970, Rauschenberg did a large installation called "Currents" for Dayton's Gallery 12 in Minneapolis. The work filled the entire gallery, measuring 6 feet high by 54 feet long. It consisted of collages made from newspaper clippings that were transferred to silkscreen. Of the images, Rauschenberg said "The world condition permitted me no choice of subject or color and method/composition." He then made two portfolios, "Features" and "Surface Series," using the images from the Minneapolis installation. In "Surface Series," he used combinations of the images, sometimes placing the negative of one image over the positive of another. A final inking with a black ghostly pattern gives them a moirÃ© effect.

Provenance
The artist; (Ronald Feldman Fine Arts, Inc., New York, NY); purchased by Martin and Joan Messinger, New York, NY; given to the Gallery in 1981
Keywords Click a term to view the records with the same keyword
20th century
1900-2000
serigraphs
Additional Images Click an image to view a larger version

Exhibition List
This object was included in the following exhibitions:
Portfolio List Click a portfolio name to view all the objects in that portfolio
This object is a member of the following portfolios:
1900 - 2000
All Graphic Arts
Collage
Dimensions in Pop
Screen Prints & Non-Prints
Serigraphs

Your current search criteria is: Portfolio is "Collage" and [Object]Century is "20th century".