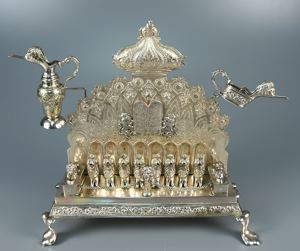 The annual celebration of Hanukkah commemorates an historical battle for religious freedom in ancient Israel. It is remembered in the ritual lighting of lamps for eight consecutive nights.

Provenance
Ethel G. and Morris C. Troper, New York, NY; their gift to Central Synagogue, New York, NY; purchased from them by the Gallery in 2006
Keywords Click a term to view the records with the same keyword
hanukkiah
judaica
Additional Images Click an image to view a larger version