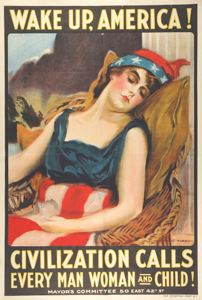 
A personification is an artistic representation of an abstract quality or idea as a person. Traditional personifications of the United States, like Uncle Sam and Columbia/America, were common in war propaganda. Columbia is a conflicting presence in American World War I posters; sometimes she is pliant and beckoning, other times solid and fearsome. The preponderance of idealized females in WWI posters, in comparison to the few representations of "real" women, contradicted the reality of American women's growing participation in factories, farms, and hospitals.

In Wake Up, America!, America dozes while the fires of war rage in the distance. Her feminine, passive characteristics-soft arms, limp hand, and white, exposed neck-are an indictment in this poster. The artist, James Montgomery Flagg, admonishes Americans to wake up and prepare for war.