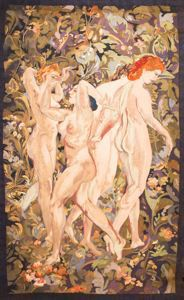 At the Gates of Morning


Arthur B. Davies was the driving force behind the 1913 Armory Show which introduced Americans to radical European abstract art, but his own style remained representational throughout his career. This tapestry of the artistâs signature lyrical nudes dancing in the landscape was one of 36 tapestries he designed and had woven by the famous Gobelins factories in France. Only six were sold during his lifetime; the rest were later destroyed in a fire.

Provenance
The artist; to his wife Dr. L. Virginia M. Davies; gift of Mr. and Mrs. Niles Meriwether Davies (son of the artist) to the Gallery in 1962
Keywords Click a term to view the records with the same keyword
nudes
women
1900-2000
tapestry
Additional Images Click an image to view a larger version

Your current search criteria is: Portfolio is "Textiles".