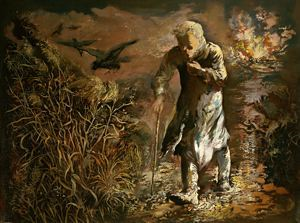 
Ten years after fleeing Germany during Hitlerâs rise to power, George Grosz painted The Wanderer in New York. As World War II raged over the ocean, Grosz created this intensely personal response to his experience as a German soldier in World War I and his 1933 emigration to the United States.
[Gallery label text, 2007]

Painted in the midst of World War II, The Wanderer is an expression of the artistâs recent life experience. George Grosz was an established painter in Germany who, like many others, spoke out against the totalitarian Nazi regime. For his own safety and that of his family, he relocated to the United States. The Wanderer was one of a group of so-called âhell picturesâ; in a letter, he wrote:

I work a lotâ¦I painted a little picture â The Wanderer â
myself of courseâ¦The resonance of explosion and
destruction often shakes me bodily.

The explosion and destruction was a reference to the war-torn European continent that he had left behind, as well as a reference to his own emotional volatility as he tried to adjust, with little success, to his new life in America, suggested in the painting by the seagrasses he knew from Long Island and Cape Cod beaches.

The Wanderer was probably one of the newest paintings acquired for the Encyclopedia Britannica Collection, as the collection was formed in 1943, the same year that Grosz painted this work. Stylistically, the paintingâs expression of personal and cultural angst â achieved through desolate subject matter, somber palette, and unquiet line â was very much an alternative view to the more upbeat images of wartime artists like Norman Rockwell.

Marks
Other inscriptions on back of frame, illegible or written on top of each other

Provenance
Encyclopedia Britannica Collection of Contemporary American Painting, Chicago, IL; purchased from them by Senator William Benton, CT, 1948; purchased from him by the Gallery in 1951
Keywords Click a term to view the records with the same keyword
Encyclopedia Britannica Collection
20th century
men
1900-2000
paintings
wandering jew
Imaginary figure of a Jerusalem shoemaker who, taunting Jesus on the way to crucifixion, was told by him to "go on forever till I return." See good article in Jewish Encyclopedia
Audio & Video Resources
Explore Audio and Video Media
Additional Images Click an image to view a larger version