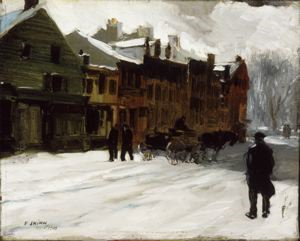 
In a city of many tough neighborhoods, New Yorkâs Sullivan Street was one of the toughest. Shinnâs depiction of the isolated figure in the foreground evokes the condition of modern man in an urban environmentâa recurring theme in the art of the Urban Realists.
[Gallery label text, 2007]

In 1897, encouraged by his mentor Robert Henri, Shinn moved from Philadelphia to New York City. Like Luks and Glackens, he was an artist-reporter as well as a painter. He exhibited with The Eight in 1908 at Macbeth Gallery. Sullivan Street was owned by the artist until 1945, when the Memorial Art Gallery purchased the canvas directly from him.

With just a few strokes of his brush, Everett Shinn has recreated an overcast winter street scene filled with mood and mystery. Sullivan Street is in Greenwich Village, around the corner from Shinn's studio on Waverly Place and near Washington Square Park, whose leafless trees can be seen beyond the buildings on the right.

Provenance
Purchased by the Gallery from the artist in 1945