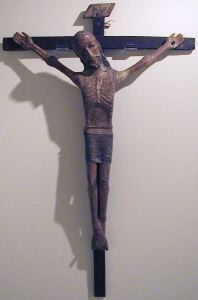 
The image of Christ on the cross is fundamental to Christian belief and the art that expresses it. The nearby Tramp Art Shrine, made in the northeastern United States, as well as many European works on the second floor of the Gallery, incorporate images similar to this santo made by an unknown santero. Santero is the traditional name for the carver of santos, which are typically figures of Christ or saints.

When European missionaries brought Catholicism across the ocean to the New World, they also brought with them traditional forms of religious iconography and woodcarving techniques. Spanish friars were the original santeros, carving the figures to decorate mission churches; during the 19th century, lay people became santeros, and santos became part of the domestic religious tradition.

Provenance
John Gordon, New York; given to the Gallery in 1973
Keywords Click a term to view the records with the same keyword
19th century
folk art
1800-1900
crucifixes
sculpture
Additional Images Click an image to view a larger version

Portfolio List Click a portfolio name to view all the objects in that portfolio
This object is a member of the following portfolios:
1800 - 1900
19th Century American Art
All Sculpture
American Folk Art
Gallery Council Gifts of Art

Your current search criteria is: Portfolio is "Gallery Council Gifts of Art" and [Object]Century is "19th Century".