Art by & About African-Americans 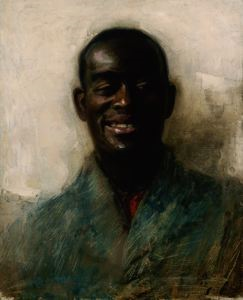 
Robert Lee MacCameron was celebrated in Europe and the United States for his insightful portraits. He moved to London in 1888, where he worked as an illustrator, before going to Paris to study at the Ãcole des Beaux-Arts. There, he studied with the major artists of the day, including Jean-LÃ©on GÃ©rÃ´me and James McNeil Whistler. His portrait commissions ranged from European nobility to prominent American politicians, including Presidents McKinley and Taft. In addition, MacCameron painted scenes and portraits of the diverse ethnic mix that populated American cities at the turn of the century.

Provenance
Artist; presented by the artist to the Rochester Art Club; given to the Gallery in 1914
Keywords Click a term to view the records with the same keyword
20th century
portraits
Images of Black People
men
1900-2000
paintings
Additional Images Click an image to view a larger version

Your current search criteria is: Portfolio is "Art by & About African-Americans".