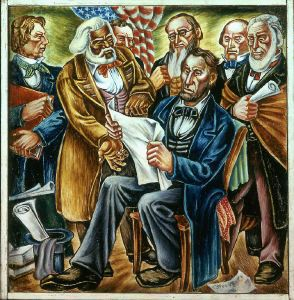 
In 1942-43, a mural competition was held for the newly built Recorder of Deeds Building in Washington, D.C. The topic was "The Contribution of the Negro to the American Nation." Hale Woodruff submitted this imagined grouping of Frederick Douglass, President Lincoln, and members of Lincoln's cabinet. While Woodruff did not win the competition, his mural study is a dramatic reminder of the alliance of two of America's most courageous leaders, Lincoln and Douglass, during a period that threatened to destroy the American union.

While Douglass never, in reality, met with Lincoln's cabinet, he did meet with Lincoln and repeatedly urged the president to issue the Emancipation Proclamation. Woodruff stressed the significance of Douglass's role by appropriating the historical image engraved by Ritchie and adding an animated Douglass and the colorful American flag.

Your current search criteria is: Portfolio is "Artists of African Descent" and [Object]Century is "20th Century" and [Objects_1]Sort_Artist contains "Woodruff, Hale".