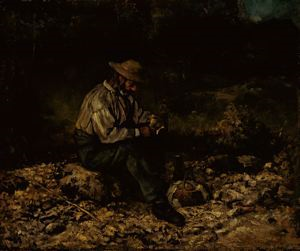 
Painting is an essentially concrete art and can only consist in the representation of real and existing things.
- Gustave Courbet (1861)

Courbet was the leading painter of a movement called Realism. Many French citizens began to advocate for democratic and socialist reforms after the Revolution of 1848 overturned the monarchy of King Louis-Philippe. Realist painters depicted modern subjects drawn from the everyday lives of the working class.

The subject matter of The Stonebreaker is similar to that of Courbetâs The Stonebreakers, which Courbet exhibited at the Salon in 1850. The earlier painting, destroyed in World War II, depicted two men dressed in heavy, tattered clothing crushing rocks near a road. Because of its raw and, according to some viewers, politically motivated subject matter, The Stonebreakers was extremely controversial with the French public. The Galleryâs The Stonebreaker, painted over 20 years later, reflects a more intimate view of the laborer, solitary as he eats his midday meal.