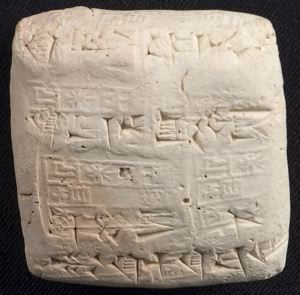 
Ur III, Lagas Sulgi 46 xi; Beer and flour, as per Marcel Sigrist, "Documents from Tablet Collections in Rochester New York," 1991

Sumeria had several kinds of flour: barley, emmer (a form of wheat), and pea flour. This tablet lists different flours given to two individuals, Akia and Susu. To officialize the record, the scribe affixed his personal seal. The cylindrical seal was rolled across the main text. It reads: "Ur Baba the scribe the son of Namu." The name Ur Baba means "Man of Baba," a well-known goddess, indicating that the scribe was her devote.

Provenance
William G. Thompson, D.D., the Bronx, NY; to his son, Gordon Thompson; Rochester, NY; his gift to the Gallery in 1954
Keywords Click a term to view the records with the same keyword
cuneiform
Additional Images Click an image to view a larger version

Bibliography
This object has the following bibliographic references:
Portfolio List Click a portfolio name to view all the objects in that portfolio
This object is a member of the following portfolios:
Ancient Art (Mediterranean & Near East)
At the Crossroads: Ancient Middle Eastern & Islamic Art
Ceramics
Cuneiform Tablets
Web Links See links to web pages and lesson plans
Cuneiform Digital Library Initiative An international catalogue of cuneiform tablets, compiled by scholars at UCLA and the Max Planck Institute for the History of Science. MAG's cuneiforms were examined by a scholar in the summer of 2011.

Your current search criteria is: Portfolio is "Ancient Art (Mediterranean & Near East)" and [Object]Nationality is "Sumerian".