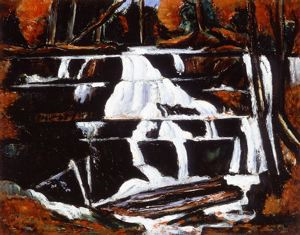 
With the introduction of modernism, landscapes painted by American artists become deeply personal exercises. Unlike the emphasis on panoramic vistas in the 19th century, modernist artists allow their personal connection and response to a waterfall or a tree become the main subject of their painting. This waterfall in the Maine woods would have held particular interest for Marsden Hartley, who felt a spiritual connection to Maine and its natural resources.
[Gallery label text, 2007]

The librarian/geologist at the Curtis Memorial Library in Brunswick, Maine finally found Hartley's Morse Pond for me. There was some confusion about the spelling of the name of the pond, as at some time Morse had become Moss, but those who have spent time in central Maine know how this can happen. I set out on a clear day in late fall, decked out in orange because it was the middle of hunting season. I wanted to get a picture of the painting at the same time of year that Hartley painted it, and snow was forecasted for the next day.

Morse Pond is located near Bingham, Maine, an hour north of Skowhegan, and is a tributary to the Kennebec River, one of the largest rivers in Maine. From looking at the map, it appeared that I could reach it by driving up route 16 and perhaps find a dirt road or path which might lead into the pond. Unfortunately this was not the case, and I drove back and forth for several hours, looking for a bridge or culvert which might indicate a river or small stream leading to a pond. The woods were thick with brush and trees that had blown down over the years, and although I found a relatively new logging road, the pond was not visible from it.

Realizing I needed local assistance, I knocked on a few doors on the sparsely populated route, and by chance found a man, perhaps in his eighties, who knew the pond and the waterfall. He had not been in to see it in ten years and warned me that it was very difficult traveling on foot because of the many "blow-downs." He directed me to Williams store in Bingham where I might find someone who knew the area and perhaps be willing to guide me to the pond.

The folks at Williams store could sell me lunch, gas, maps, hunting equipment and licenses, lottery tickets, rent me a movie and tag my deer, but no one knew anything about Moss (Morse) Pond. Nor, I was told, would it be possible to get a guide because the guides were all out hunting. I was getting very discouraged when two young men in blue reflective sunglasses drove up with a dead deer hanging out the back of their truck. Greetings were exchanged with the owner of Williams store (Dana), who indicated that one of the young men was a native of the area and might know the location of Morse Pond.

I was in luck. Sean, who turned out to be a Unity College student in Unity Maine, studying conservation and forestry, knew the pond and the waterfall, although he had not been there in years. Because he had already bagged his deer and was not in a hurry to return to school, he told me he would show me the dirt road to the pond!

I followed their truck in my Subaru wagon up Mahoney Hill road until their truck began to crawl over boulders and seemingly swim through bottomless puddles. The guys hopped out and suggested I ride the rest of the way with them. As we bounced along I told them about Hartley, his love for the Maine woods and rivers, and his painting of the waterfall at Morse Pond. By the time we could look over the side of the road and see a stream below, all of us were excited to find the waterfall. And there, in the middle of the woods, was the waterfall. As I scrambled down the bank, I wondered how Hartley, probably in his early sixties and not physically strong, had ever found this place.

As I took pictures of the waterfall, I noticed the light which reflected off the trees, fallen leaves and water, the rich dark reds of late fall, just like the colors in Hartley's painting. I tried to stand where I think Hartley might have stood, looking up at the waterfall, viewing a bit of blue sky in the distance. The waterfall, still framed by diagonal trees, was churning with frothy energy as the water tumbled its way down to the Kennebec River. Hartley had painted logs at the bottom of the waterfall, perhaps making reference to the use of this waterway to transport logs eventually to the saw mills of Maine's booming lumber industry in the late 1930's.

After I took the pictures, I stood entranced by the scene, particularly struck by the silence of the deep woods, seemingly so far from civilization. Hartley probably studied this scene for hours, not just for the composition and colors he would use, but also to fully immerse himself in the spiritual presence of this part of nature. He then could carry the scene with him, and the painting would later come from his soul.

Provenance
Ione and Hudson D. Walker, New York, 1940; purchased from them by the Gallery in 1965
Keywords Click a term to view the records with the same keyword
20th century
landscapes
1900-2000
paintings
waterfalls
Additional Images Click an image to view a larger version

Your current search criteria is: Portfolio is "Landscapes" and [Objects_1]Sort_Artist contains "Hartley, Marsden".