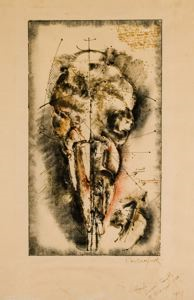 
Object Type: Drawing
Medium and Support: Crayon on paper
Credit Line: Gift of a Friend of the Gallery
Accession Number: 1955.248
Link to this object
Location: Not currently on view


The year before Don Manfredi drew Skull, the New York Times singled him out in its review of an exhibition at the Weyhe Gallery: âThe star here is young Don Manfredi, aged 16 . . . highly imaginative and very expert in his novel geometricizing, so to speak, of landscape.â Although he continued to paint and draw for the rest of his life, by the mid-1950s he was designing sets for Broadway productions as well. Those who met him after he arrived in Rochester in 1968 remember him as a conservator of paintings; MAG was among his clients. A few years before his death, Manfredi moved to the Italian Riviera, where he felt he would once again have time to pursue his own art.

Marks
Artist's signature, lower right: Don Manfred To Hildegarde sincerest thoughts of this past year 1948
Keywords Click a term to view the records with the same keyword
by Rochester artists
20th century
1900-2000
drawing
Additional Images Click an image to view a larger version