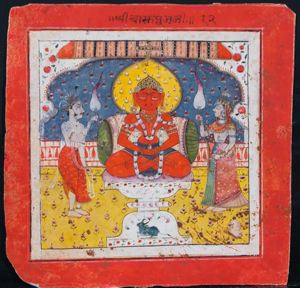 
Shri Baspuj ji (also called Vasupujya) was the twelfth of 24 Tirthankaras, men who have attained Nirvana and serve as guides for those practicing Jainism (an ancient Indian religion preaching non-violence). Only the last two Tirthankaras, dating from the 9th and 6th centuries BCE, are actual historical figures; the others are believed to have lived from several thousand to several millions of years ago.

Several clues in this painting allude to the figureâs identification as Shri Baspuj ji. Each Tirthankara has a color and an animal associated with him â Shri Baspuj jiâs color is red and his animal is the buffalo. Finally, the words at the top translate to âShri Baspuj ji.â

Provenance
Mrs. Joyce Griffith, Newark NJ; purchased from her by the Gallery in 1969
Additional Images Click an image to view a larger version

Your current search criteria is: Portfolio is "Indian Art" and [Object]Century is "19th Century".