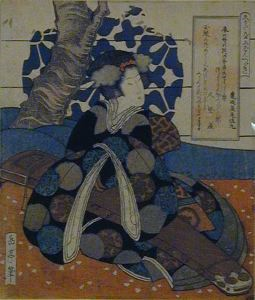 
Object Type: Print
Medium and Support: Color woodcut
Credit Line: Transfer from the Art Department of the University of Rochester
Accession Number: 1997.228
Link to this object
Location: Not currently on view


The title of this print indicates that it was originally one of a series of five. It appears to pun on the archaic term hisakataya, or "gleaming", a formulaic word used in ancient poetry to modify celestial phenomena such as stars, snow or, as here, falling cherry-blossom petals; and the Hisakata-ya, which was probably the name of the teahouse or restaurant where this particular poetry club met. Hisakataya is also the pen name of one of the two poets whose work is inscribed on the print.

The woman depicted here, perhaps an entertainer at the teahouse, continues the classical tone of the print by playing not a shamisen, the favored instrument of the entertainment world, but rather a koto, preferred by the ancient aristocracy. There are two poems on the koto. The one on the right, written by the poet Kamenoya Osamaru, reads:


Clouds of cherry-blossoms
On this spring day
Conceal the bamboo thicket
From whence come the sounds
Of a jewelled koto.

Bibliography
See general reference in "Hokusai and his School." Amsterdam: Rijksmuseum, 1982: p. 126, no. 240a, there titled "A set of five prints for the Hisakataya club."
Keywords Click a term to view the records with the same keyword
Japanese
Ukiyo-e
Additional Images Click an image to view a larger version

Your current search criteria is: Portfolio is "Japanese Art" and [Object]Century is "19th century" and [Object]Object Type is "Print" and [Object]Period is "Edo Period (1600-1868)".