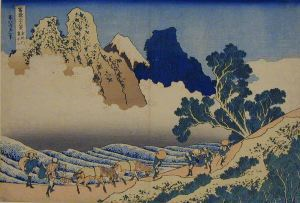 
Full Title:Mt. Fuji behind the Minobu River from the series "Thirty-six Views of Mt. Fuji"
Object Type: Print
Medium and Support: Color woodcut
Credit Line: Given in memory of Charles Reed Weeth, M.D. by an Anonymous Donor
Accession Number: 1981.42
Link to this object
Location: Not currently on view


This print, which shows figures traveling along the banks of the Minobu River and, shrouded in mist, Mt. Fuji rising in the distance, is part of Hokusai's best-known and unified series "Thirty-six Views of Mt. Fuji." Prints from this series explore the sacred mountain from all distances, every possible angle and in all seasons. Here, Hokusai has rendered the Minobu River as stylized waves of rolling water. The unusual large horizontal format is a way of dramatizing groups of travelers as characters on a stage-set of natural scenery.