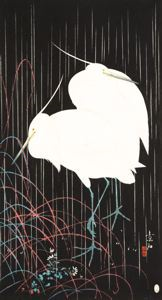 Herons in the Rain


Komori Soseki designed kacho-e, or âbird and flower prints,â during the 1920s and early 1930s. Although little is known about his life, Komori Sosekiâs work, like that of the artist Yoshida Hiroshi seen at the left, represents the shin-hanga, or ânew print,â movement in Japan after the end of the Meiji period in 1912. Shin-hanga artists worked in the traditional manner: they created art, primarily of characteristically Japanese subject matter, which was then produced as a print by a publisher rather than the artist himself.

Even though kacho-e prints were not as favored by Japanese collectors as the earlier ukiyo-e prints of landscapes and actors, they were very popular with Western collectors and became lucrative exports for Japanese publishers.

Exhibition List
This object was included in the following exhibitions:
Portfolio List Click a portfolio name to view all the objects in that portfolio
This object is a member of the following portfolios:
Animals in Art
Japanese Art
Relief Prints