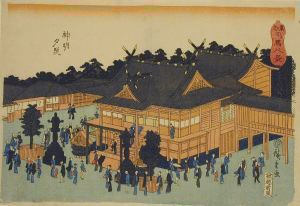 
Full Title:Evening Glow on Jinmei Shrine from the series "Eight Views of the Shiba District in the Capital City"
Object Type: Print
Medium and Support: Color woodcut
Credit Line: Gift of Dr. James B. Austin
Accession Number: 1987.34.8
Link to this object
Location: Not currently on view


"Evening Glow on a Fishing Village" has become "Evening Glow on Jinmei Shrine." Jinmei, which literally means "God-bright," was a term used to indicate the chief of all ShintÃ´ deities, Amaterasu no Ãmikami, who is enshrined here. The Jinmei Shrine, also called the Great Shrine of Shiba (Shiba Dai JingÃ»), was one of Edo's most popular places for outings, and its popularity made it a favorite place as well for particularly brazen prostitutes who were parodied in poetry:

Bibliography
See general mention in Shozaburo Watanabe, "Catalogue of the Memorial Exhibition of Hiroshige's Works on the 60th Anniversary of his Death," 1918, p. 27; cat. no. 115 describes the set, Eight Views of Shiba, Yedo. [See http://www.hiroshige.org.uk/hiroshige/watanabe/catalogue_103_133.htm, no. 115.] This print is entitled "Shimmei no yusho" or "Sunset at the Shimmei Shrine."
Keywords Click a term to view the records with the same keyword
Japanese
1800-1900
shrines
woodcuts
Ukiyo-e
Additional Images Click an image to view a larger version

Exhibition List
This object was included in the following exhibitions:
Portfolio List Click a portfolio name to view all the objects in that portfolio
This object is a member of the following portfolios:
1800 - 1900
All Graphic Arts
Architecture
Japanese Art
Relief Prints
Web Links See links to web pages and lesson plans
Catalogue of the Memorial Exhibition of Hiroshige's Work Online version of Shozaburo Watanabe's book: Catalogue of the Memorial Exhibition of Hiroshige's Work on the 60th Anniversary of his Death, Tokyo: Ukiyoye Association, 1918. This work is listed under catalogue no. 115, Shinmei No Yusho, Sunset at Shinmei Shrine

Your current search criteria is: Portfolio is "Japanese Art" and [Object]Century is "19th century".