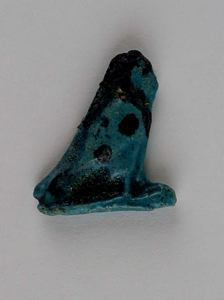 The figure of the ba-bird has a human head on a birdâs body and symbolizes the ba, one of the human spirits that could return to the body after death. Ba-bird amulets were usually placed on the mummyâs chest and, if necessary, could act as a substitute for the ba of the deceased.

Exhibition List
This object was included in the following exhibitions:
Bibliography
This object has the following bibliographic references:
Portfolio List Click a portfolio name to view all the objects in that portfolio
This object is a member of the following portfolios:
1000 BCE - 500 CE
2000 - 1000 BCE
All Decorative Arts
Ancient Egyptian Art
Ceramics
Egyptian Art
Web Links See links to web pages and lesson plans
Protected for Eternity: The Coffins of Pa-debehu-Aset, Gallery Guide Explore the world of Pa-debehu-Aset, and the sacred stories that relate the Egyptian journey to the afterlife. Learn how a mummy is made, and explore reading and writing in ancient Egypt.
Ocumpaugh property at 51-55 Main Street East Note from the Rochester Images project, direct url: http://photo.libraryweb.org/carlweb/jsp/DoSearch?databaseID=716&count=10&terms=19789&index=z