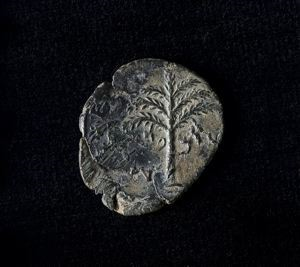 Coin of the Bar Kochba Rebellion Against Rome


During the Roman occupation of Judaea, Jews restamped foreign coins with Hebrew inscriptions and Jewish symbols, such as the palm tree signifying the holy menorah of the Temple. These coins provided financial and moral support to their rebellion against Rome in 133 CE.

Led by Shimon Bar Kochba, Judaea rebelled against Roman rule for the second time in 132 C.E. The revolt was brutally crushed by Julius Severus in 135. This coin, crudely restruck over a Roman one (bronze was at a premium), features a palm tree on one side and grape leaves on the other.

Provenance
Dr. and Mrs. Ralph Alexander, Rochester, NY; their gift to the Gallery in 1995
Keywords Click a term to view the records with the same keyword
Roman
1000 BCE - 500 CE
coins
money
Additional Images Click an image to view a larger version

Portfolio List Click a portfolio name to view all the objects in that portfolio
This object is a member of the following portfolios:
1000 BCE - 500 CE
Ancient Roman
At the Crossroads: Ancient Middle Eastern & Islamic Art
Coins
Coins and Seals

Your current search criteria is: Portfolio is "1000 BCE - 500 CE" and [Object]Object Type is "Numismatics" and [Object]Nationality is "Roman" and [Object]Century is "2nd Century".