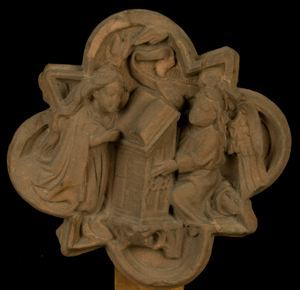 Keystone with Scene of the Annunciation


In Christian tradition, the scene of the Annunciation depicts the moment of the angel Gabrielâs announcement to the Virgin Mary that she would conceive a child and become the mother of Jesus, the Son of God. Here, the Virgin kneels before a large open book on a reading pulpit. The winged Gabriel faces her, kneeling on the other side of the pulpit. The hand of God emerges from the frame at the top, directing a dove, the symbol of the Holy Spirit, toward the Virginâs head.

This sculpture was originally an architectural keystone, the central stone of an arch that locks its parts together. The structure of the back of the piece indicates that it probably came from the center of a square vault with four ribs. Its small size and the high level of detail in the carving suggest that it was installed close to the viewer where it could be easily seen, perhaps in a bay of a cloister walk or in a small porch.

Your current search criteria is: Portfolio is "1000-1400" and [Object]Century is "15th Century" and [Object]Nationality is "French" and [Objects_1]Sort_Artist contains "Unknown, French or German".