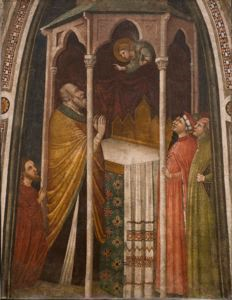 The Annunciation to Zacharias


This painting was once part of a cycle of frescoes in the church of Santa Lucia in Fabriano, a town northeast of Rome. The series probably depicted the story of the life of Saint John the Baptist, who, according to Christian tradition, was the precursor of Christ. The subject, taken from the first chapter of the gospel book of Luke, presents the vision of the aged Zacharias as he officiates at the altar of incense and learns from the Angel Gabriel that his wife Elizabeth, although âwell stricken in years,â is to bear a son, John, who will âmake ready a peopleâ for the coming of the Lord. The crowds, who âwaitedâ¦and marveled,â are at the right, dressed in the style of Florence during the 1300s. The pointed turban of the middle figure indicates that he is Jewish. The kneeling figure at the left is probably the donor of the painting.

This painting was removed from the wall in the 1800s and has since been remounted on canvas. It has been connected to two others from the same church, The Crucifixion in the Museum of Fine Arts, Boston, and The Birth of John the Baptist in the Galleria Nazionale, Rome.