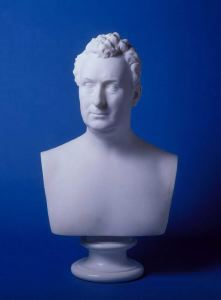 
âNow then for a small piece of vanityâPowers, the sculptor, is taking me in clay, to be wrought in marble in Italy next summer. If he does not get a perfect head, it will be his first failure.â

New York Congressman and Canandaigua resident Francis Granger was one of many prominent American politicians to sit for a classical-style portrait bust by Hiram Powers. Many Grand Tourists made Powersâ sculpture studio in Florence, Italy, a stop on their travels, to witness the artist at work, view his latest creations, or commission a personal artwork.

Why do portrait busts often have blank eyeballs? Hereâs one theory: originally, many ancient Greek and Roman sculptures were painted, including the eyes, but over the years the paint has faded so that by the 19th century, the eyes appeared to be blank. While 19th century artists often modeled their portrait busts of important political figures on these Classical forms, they did not know that the eyes had been painted originally, so they left them blank. Only with current technology has it been possible to understand how the older sculptures actually appeared.

The subject of this sculpture, Francis Granger (1792 â 1868), was born a decade after the American Revolution and died right after the Civil War. A congressman from nearby Canandaigua when he posed for this sculpture in 1837, he said: âNow then for a small piece of vanity â Powers, the sculptor, is taking me in clay, to be wrought in marble in Italy next summer. If he does not get a perfect head, it will be his first failure.â

Exhibition List
This object was included in the following exhibitions:
Bibliography
This object has the following bibliographic references:
Portfolio List Click a portfolio name to view all the objects in that portfolio
This object is a member of the following portfolios:
1800 - 1900
19th Century American Art
All Sculpture
From Rochester Collections
History in Art
If Elected I Will Serve
It Came from the Vault: Rarely Seen Works from MAGâs Collection
Men
New York State & Local History
Political Images
Portraits
Web Links See links to web pages and lesson plans
Granger Homestead Website of the Granger Homestead and Carriage Museum, home to four generations of the Granger family, in Canandaigua, NY.
It Came from the Vault exhibition catalogue Entry for this artwork in the It Came from the Vault exhibition catalogue. The exhibition ran from March 17-June 9, 2013