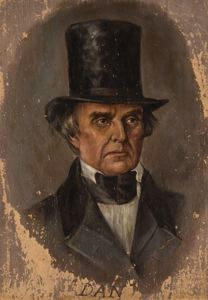 
Orator, lawyer, statesman, and senator Daniel Webster (1782â1852) was the subject of many portraits, but none more charming than this one, informally titled Dan. Information on the back says the painting was copied from an engraving, which was no doubt itself a copy of an 1840s daguerreotype by F. DeBourg Richards.

Chief curator Marjorie Searl has determined that the original attribution to G. K. Merrick is incorrect. Markings on the back of the portrait were misleading; the signature for Merrick, an attorney in Wellsboro, PA, probably indicated ownership. Another inscription, âpainted from an engraving by George Deming, Wellsboro, Pennsylvania,â most likely led to the interpretation that Deming was the engraver and Merrick was the painter. Thanks to the internet and Ancestry.com, we can now safely say that Deming was the painter, and we can speculate that Merrick purchased it from him.

Marks
Inscription, verso: Painted from an engraving by George Deming, Wellsboro, Pa. About 1850

Your current search criteria is: Portfolio is "American History" and [Object]Century is "19th Century".