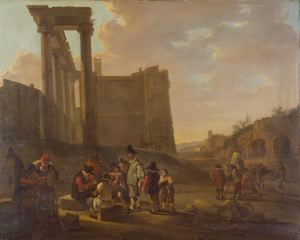 
As an independent subject of painting, landscape first emerged in Europe during the 1600s. Its development reflects changes in the views commonly held at that time on the universe and manâs relation to it. As landscape painting developed, the Dutch were quick to acquire a taste for Italian settings and motifs. In this painting, Both uses Italian motifs, such as ruins, as pictorial elements; he then combines them with the typical genre scene of a group of men playing cards.

Also called The Ruins of the Temple of Saturn, this painting is a version of the original Jan Both painting of the same subject that is owned by the Alte Pinakothek in Munich, Germany. It was probably painted by either Jan Both or his brother, Andries.

Born in Utrecht, Both subsequently traveled to Rome, where he remained from 1635 until 1641, when he returned to Holland. He was among the leading âbamboccianti,â as the Dutch painters were called who assimilated their native genre tradition with the classical landscape tradition they discovered in Italy. This popular composition, an autograph version of which survives in the Alte Pinakothek, Munich, shows low-life types amusing themselves near the formidable ruins of the Temple of Saturn.

Exhibition List
This object was included in the following exhibitions:
Bibliography
This object has the following bibliographic references:
Portfolio List Click a portfolio name to view all the objects in that portfolio
This object is a member of the following portfolios:
1400 - 1600
1600 - 1800
17th Century European Art
All Paintings
Animals in Art
Architecture
Children
Daily Life
Landscapes
Leisure Activities
Men
Objects with Incomplete Nazi-Era Provenance
Promenade: A Musical Procession Through Paintings at the Memorial Art Gallery
Web Links See links to web pages and lesson plans
Partite diverse di Follia Excerpt from Bernardo Pasquini's Partite diverse di Follia, performed by Edoardo Bellotti on the Italian Baroque Organ, to accompany this painting.

Excerpts from the Promenade CD copyright and courtesy of The Gothic Catalog, LRCD-1097.

Your current search criteria is: Portfolio is "Children".