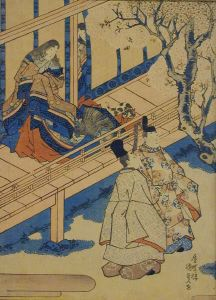 Scene from the "New Herbs, I" chapter, The Tale of Genji


The early-11th century Tale of Genji was a favorite theme of Edo period art. This scene refers to the problematic moment when the young Kashiwagi, the son of Genji's old friend TÃ´ no ChÃ»jÃ´, catches a glimpse of one of Genji's wives, the Third Princess, whose errant cat she has chased out onto the verandah in the springtime. (Later in the story, Genji will be cuckolded by Kashiwagi, whose son the Third Princess bears.)

Although the scene shown here does not suggest that the Princess, who like all noblewomen should remain out of the sight of men, has just been chasing her cat into plain viewâthe cat is, after all, asleep on its own cushionâany woman depicted in court robes on a verandah with a cat is invariably the Third Princess. The two young men in court robes may therefore be identified as Kashiwagi and his companion, Genji's son YÃ»giri.