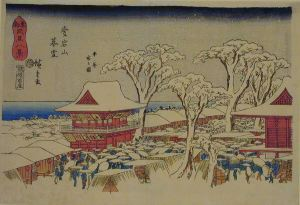 
Full Title:Night Snow over Mt. Atago from the series "Eight Views of the Shiba District in the Capital City"
Object Type: Print
Medium and Support: Color woodcut
Credit Line: Gift of Dr. James B. Austin
Accession Number: 1987.34.6
Link to this object
Location: Not currently on view


"Night Snow over Mt. Atago" replaces "Night Snow over a River Sky," and the script near the treetops tells us that the scene is of the year-end fair on this Shiba height with its unparalleled view over the bay. In his "Hundred Views of Edo" Hiroshige will turn this view into a dramatic closeup of the owner of a famous teashop atop this hill as he stands impressively against the New Years dawn over the bay. One of the temple buildings is shown here with donated paintings called ema arrayed under its eaves, while the masses of people move among the temporary stalls set up under the snow-covered trees to sell every sort of trinket and food. These same stalls can still be found selling pretty much the same things in the famous "inner shops" (nakamise) of the Asakusa SensÃ´ji temple. A few of Edo's ubiquitous fire watch-towers can be seen sketched in down in the flatlands along the bay where the merchant class lived and worked.

Bibliography
See general mention in Shozaburo Watanabe, "Catalogue of the Memorial Exhibition of Hiroshige's Works on the 60th Anniversary of his Death," 1918, p. 27; cat. no. 115 describes the set, Eight Views of Shiba, Yedo. [See http://www.hiroshige.org.uk/hiroshige/watanabe/catalogue_103_133.htm, no. 115.] This print is entitled "Atagoyama Bosetsu," or "Evening Snow at Atago Shrine."
Keywords Click a term to view the records with the same keyword
Japanese
Ukiyo-e
Additional Images Click an image to view a larger version

Exhibition List
This object was included in the following exhibitions:
Portfolio List Click a portfolio name to view all the objects in that portfolio
This object is a member of the following portfolios:
1800 - 1900
All Graphic Arts
Japanese Art
Relief Prints
Web Links See links to web pages and lesson plans
Catalogue of the Memorial Exhibition of Hiroshige's Work Online version of Shozaburo Watanabe's book: Catalogue of the Memorial Exhibition of Hiroshige's Work on the 60th Anniversary of his Death, Tokyo: Ukiyoye Association, 1918. This work is listed under catalogue no. 115, Atagoyama Bosetsu, Evening Snow at Atago Shrine.