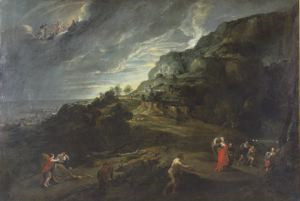 Ulysses Landing on the Island of the Phaeacians


The monumental painting âUlysses Landing on the Island of the Phaeaciansâ was inspired by a passage in Book 6 of Homerâs âOdysseyâ in which the shipwrecked hero swims to safety and finds refuge from the stormy sea on an unknown shore. Arriving at night, he falls asleep between two trees and at dawn is awakened by the playful shouts of the princess Nausicaa and her attendants. Rubens has depicted the moment when Odysseus emerges to ask for food and shelter. The action occurs in the foreground of the canvas; the landscape is rich in terrestrial detail and is filled with a variety of atmospheric effects.

Rubens is often considered the most versatile and influential Baroque artist of 17th century northern Europe. Highly educated, his knowledge of Classical art and literature was thorough and complex. In order to fulfill innumerable private commissions, he collaborated on many works with other artists and students in his studio. Although Rubens provided designs and oversaw production, his personal involvement with individual paintings varied. Replicas were frequently painted by assistants. A smaller version of this painting, attributed to Rubens rather than his studio, is today in the Pitti Palace in Florence, Italy.

Exhibition List
This object was included in the following exhibitions:
Bibliography
This object has the following bibliographic references:
Portfolio List Click a portfolio name to view all the objects in that portfolio
This object is a member of the following portfolios:
1600 - 1800
17th Century European Art
All Paintings
Baroque Art
Fountain Court
Storytelling with Art

Your current search criteria is: Portfolio is "Storytelling with Art" and [Object]Nationality is "Flemish".