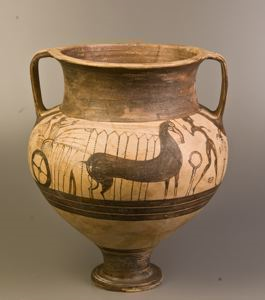 
A krater is a large, wide-mouthed jar, often used for mixing wine and water. These two kraters [51.203, 51.204] were found on Cyprus, an important island in the trade routes of the ancient Mediterranean and location of a significant Mycenaean colony. They likely served a funerary function, holding wine at the funeral feast, or containing the cremated remains of the deceased.

The similar scenes on these two kraters represent the popular Mycenaean decorative motif of horse-drawn war chariots. The vase painter represented the two horses as a single body with two heads, two tails, and two pairs of forelegs and hind legs.

The scene may refer to honors for a fallen warrior as described by Homer in the Iliad, where, during the Trojan War, the Greek hero Achilles led a solemn chariot procession in tribute to his dead companion Patroclus.

Your current search criteria is: Portfolio is "Storytelling with Art" and [Object]Object Type is "Ceramics" and [Object]Nationality is "Mycenaean".