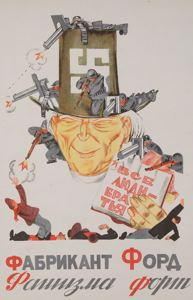 In this image, which addresses the threat of Nazi Germany to the Soviet Union, the hat of the American icon Uncle Sam is crowned with a Nazi swastika. The soldiers on the brim of the hat fire machine guns into the populace on the ground. The figure of Uncle Sam holds a Bible open to a page that assures "All men are brothers."

The caption for this image refers to Henry Ford, the founder of the American automotive industry and one of the wealthiest businessmen in the world. In 1931, Ford, a staunch supporter of Hitler, established a factory in Cologne, Germany, which, along with the factories of General Motors, provided many of the trucks that eventually motorized the Nazi attempt to conquer Europe.