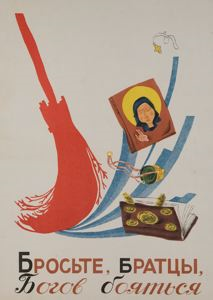 Comrades, Clean out the Cult's Claptrap!
The letter Б from The Anti-Religious Alphabet

The red color of the large silhouetted broom links it to the Soviet government, which, beginning in 1929, actively set out to close and destroy churches, bells and objects used in the practice of religion. Some religious objects, such as icons, crosses and bibles, were relocated in special anti-religious museums where they were displayed as artifacts of an ancient cult.

Here, the broom sweeps the floor to remove an icon with an image of the Virgin Mary, a censer used in Orthodox religious rituals, a bible, and a chotki, or prayer rope used for saying repetitive private devotional prayers.