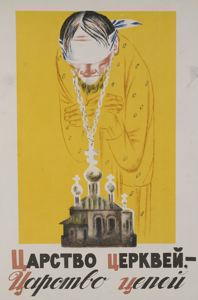 The Soviet anti-religious campaigners believed that the common man was enslaved by the church, and that his freedom could only be obtained by embracing the doctrine of atheist communism. The man in this image, blindfolded and chained to the dome of a church, wears the traditional tunic and hairstyle of a Russian peasant. The cross that he wears on the chain around his neck is the same one that extends from the top of the church dome.

Exhibition List
This object was included in the following exhibitions:
Bibliography
This object has the following bibliographic references:
Portfolio List Click a portfolio name to view all the objects in that portfolio
This object is a member of the following portfolios:
1900 - 2000
20th Century European Art
All Graphic Arts
Literacy for Little Comrades: The Anti-Religious Alphabet
Planographic Prints
Political Images