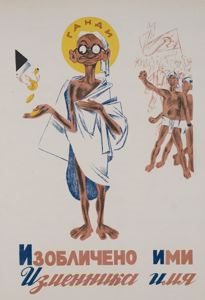 The Jury's Judgment: Jeers for a Judas
The letter И from The Anti-Religious Alphabet

The religious faith and passive resistance movement of Mahatma Gandhi, the Hindu leader who was an activist for the rights of Indians under British colonial rule, was in direct opposition to the philosophy of the militant Soviet anti-religious campaign. On the left, Gandhi is shown with his hand outstretched, receiving money from the bejeweled hand of a capitalist; on the right, masses of Indians carrying the Soviet flag with its sign of the hammer and sickle raise their fists in anger.