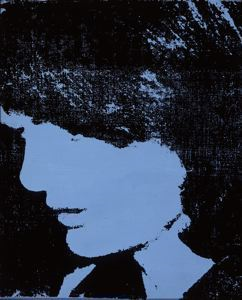 
Warhol often used an unorthodox approach to portraiture. He borrowed from media photographs of celebrities to construct an individualâs public image instead of using a brush to render an idiosyncratic artistic interpretation of a sitterâs appearance.

This work is part of Warholâs âJackieâ series, which he began shortly after the assassination of President John F. Kennedy in 1963. As the basis for the paintings, he first selected eight photographs from the mass-media coverage of the event. He then cropped the pictures to focus on the Presidentâs widow, Jacqueline Kennedy. Warhol used a commercial silkscreen technique to produce multiple versions of his work. As Warhol described,

I wanted something that gave more of an assembly line effectâ¦.With silkscreening you pick a photograph, blow it up, transfer it in glue onto silk, and then roll ink across it so the ink goes through the silk but not through the glue. That way you get the same image, slightly different each time. It was all so simple quick and chancy.

Exhibition List
This object was included in the following exhibitions:
Bibliography
This object has the following bibliographic references:
Portfolio List Click a portfolio name to view all the objects in that portfolio
This object is a member of the following portfolios:
1900 - 2000
20th Century American Art
All Graphic Arts
If Elected I Will Serve
Political Images
Screen Prints & Non-Prints
Seeing America
Serigraphs
Women
Web Links See links to web pages and lesson plans
Seeing America Inservice Materials from a teacher in-service presentation Spring 2008
Seeing America Chapter on Andy Warhol's Jackie, written by Marjorie B. Searl.

Your current search criteria is: Portfolio is "If Elected I Will Serve" and [Object]Object Type is "Print" and [Objects_1]Sort_Artist contains "Warhol, Andy".