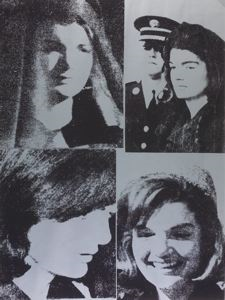 
The images that Andy Warhol used of Jacqueline Bouvier Kennedy were based on photographs by Fred War in "Life" magazine, December 6, 1963.

President John F. Kennedy was the first âtelevision president;â he and his wife and children were regulars on our TVs, as if they were our royal family. After the Presidentâs assassination, Warhol treated images of Jacqueline Kennedy as a popular culture commodity much like his ubiquitous Campbell Soup can.

Warhol used a commercial silkscreen technique to produce his art. âI wanted something that gave more of an assembly line effectâ¦ With silkscreening you pick a photograph, blow it up, transfer it in glue onto silk, and then roll ink across it so the ink goes through the silk but not through the glue. That way you get the same image, slightly different each time. It was all so simple quick and chancy.â

Exhibition List
This object was included in the following exhibitions:
Bibliography
This object has the following bibliographic references:
Portfolio List Click a portfolio name to view all the objects in that portfolio
This object is a member of the following portfolios:
1900 - 2000
All Graphic Arts
If Elected I Will Serve
Political Images
Screen Prints & Non-Prints
Serigraphs
Women