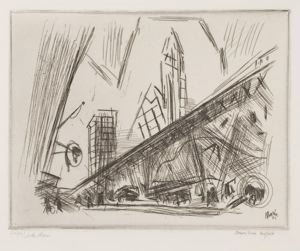 In John Marinâs Downtown, New York, the viewer experiences the dizzying, disorienting sensation of looking up at the buildings while walking on a city street. Marinâs urban vision was one of energy, force, and fragmentation. He sought to capture the frenetic pace of the modern urban experience and the power of skyscrapers as though they themselves were active players in the cityâs vitality, as âwarring, pushing, pulling forces.â The slashing diagonal form is the elevated railroad that dominated the New York City landscape starting in the 1870s.

Your current search criteria is: Portfolio is "New York City" and [Object]Object Type is "Print" and [Object]Century is "20th Century".