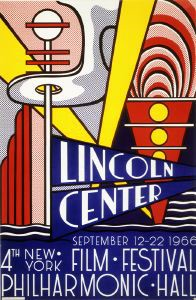 
This Pop Art poster was created to advertise the fourth New York film festival at Lincoln Center in 1966. With primary colors and his signature Ben Day dots (used in commercial printing to produce halftones), Lichtenstein integrated bold elements to create an attention-getting image that would be visible on city streets. He was paid to design the poster by the Lincoln Center Poster Project, which was begun by New York philanthropist Vera List. In an interview in 1973, Mrs. List described her reason for creating the project:

"Iâve always believed that oneâs environment is what stimulates people. Itâs what stimulated me as a childâ¦youâd go to Paris and see all the exciting posters around there which were very colorful and stimulatingâ¦but you walk around New York, and you see the three-sheeter. So that gave birth to the idea of allocating a certain sum for posters. The idea was to commission the fine artist, the creative artist of the timeâ¦to bring to the general public âthey walk down the street, they see an image, something would attract them, and something would happenâ¦I always felt that if peopleâs sensibilities were awakened, they would seek to make the whole city a more amenable place in which to live. So thatâs how that started."

Your current search criteria is: Portfolio is "New York City" and [Object]Object Type is "Print" and [Objects_1]Sort_Artist contains "Lichtenstein, Roy".