The Lord's Law Lauds the Lords 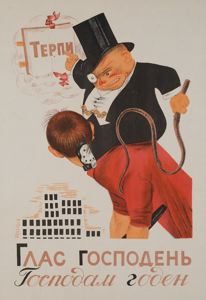 The wealthy and fat capitalist, riding heavily on the back of a common man, points to a Bible opened to the words "Be patient." According to the anti-religious campaigners, the acceptance of Christian belief resulted in the enslavement of the masses, shown here by the whip that the capitalist wields.

Your current search criteria is: Object is "The Lord's Law Lauds the Lords".