Blacksmith, Beat the Bells into Ballbearings 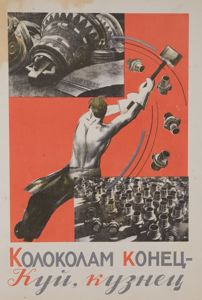 Blacksmith, Beat the Bells into Ballbearings
The letter К from The Anti-Religious Alphabet

On January 30, 1929, the Presidium, one organ of the Soviet government, banned the pealing of church bells, and within the next three years, hundreds of churches were demolished or closed and looted. Massive numbers of bells and icons were destroyed; the metal was used to support industrialization efforts.

Exhibition List
This object was included in the following exhibitions:
Bibliography
This object has the following bibliographic references:
Portfolio List Click a portfolio name to view all the objects in that portfolio
This object is a member of the following portfolios:
1900 - 2000
20th Century European Art
All Graphic Arts
Literacy for Little Comrades: The Anti-Religious Alphabet
Planographic Prints
Political Images

Your current search criteria is: Object is "Blacksmith, Beat the Bells into Ballbearings".