The Martyrdom of St. Ludmilla 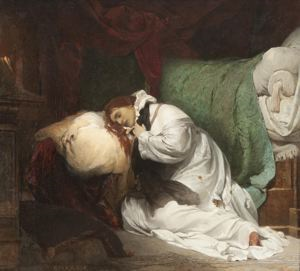 The Martyrdom of St. Ludmilla


Gabriel Cornelius Ritter von Max was born in Prague and studied at the academies of Prague, Vienna, and Munich. St. Ludmilla, one of his earliest works, demonstrates the sensual otherworldliness for which he was known. These early pictures, controversial and admired by both critics and the public, often show young women experiencing or having just passed through an ecstatic state.

This painting illustrates the death of Ludmilla, one of the main saints of the city of Prague. According to tradition, Ludmilla was married to the Duke of Bohemia. She was a devout Christian whose pious example inspired her son, Wratislaus, to entrust her with raising his two sons. By doing so, Wratislaus deeply offended his wife, Drahomia, who, after her husbandâs death, hired assassins to kill her mother-in-law in order to seize political control. The assassins came to Ludmillaâs room while she was in prayer and strangled her with her own veil.

Maxâs representation depicts the moment between life and death. Dressed in a white gown, Ludmilla lays sprawled against the base of her bed. Her left hand still clutches the black veil with which she was strangled. Her prayer book remains open on its stand, on top of the desk to her left.

Your current search criteria is: Object is "The Martyrdom of St. Ludmilla".