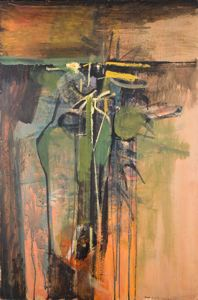 
Object Type: Painting
Medium and Support: Oil on canvas
Credit Line: Anonymous gift through the American Federation of Arts
Accession Number: 1964.66
Link to this object
Location: Not currently on view


As a 25-year-old student at the Cranbrook Academy of Art, Kurt Feuerherm was represented in the Metropolitan Museum of Artâs first U.S. painting competition by a powerful depiction of a Mexican meat market that showed a crucifix hanging with butchered animal carcasses. Life magazine illustrated the work in a January 1951 article about the new generation of contemporary artists. In 1953, after graduating from Yale School of Art, Feuerherm moved to Rochester and taught, over the years, at Rochester Institute of Technology, MAGâs Creative Workshop, Monroe Community College, and Empire State College. Recently, he and three of his past students were featured in RoCoâs annual Makers and Mentors exhibition.

Your current search criteria is: Object is "Honeoye #11".