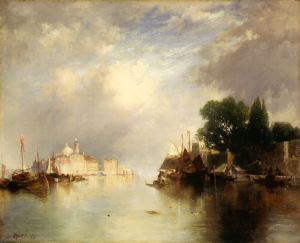 
Object Type: Painting
Medium and Support: Oil on canvas
Credit Line: Given in loving memory of Cornelia Robinson and Henry Douglas Buell by their daughter Jane Buell Ward and family
Accession Number: 2000.6
Link to this object
Location: Not currently on view


Thomas Moran was an adventurous landscape painter who traveled far and wide in search of compelling views. He accompanied the first government-sponsored expedition to Yellowstone, shortly before it became a national park, and his drawings and watercolors from that expedition formed the basis for dramatic paintings of western views. In 1886, he journeyed to Venice, where his watercolors captured views of lagoons and picturesque buildings. These sketches formed the basis of immensely popular studio paintings like the one hanging here.

In the second half of the nineteenth century, Venice was a favored Old World destination for many American writers and painters, including Mark Twain, Henry James, and James MacNeill Whistler. However, Moran's work probably had the greatest impact on Americans' awareness of La Serenissima (the most serene), a fond nickname for Venice.

Provenance
Purchased from the artist by Daniel Cottier (1838-1891, dealer) New York; presumably purchased from him by Vose Galleries, Boston; purchased from them by James Sibley Watson (1860-1951), Rochester, NY, 1936; gift of his estate to the Gallery in 1951
Keywords Click a term to view the records with the same keyword
19th century
seascapes
1800-1900
paintings
boats
Venice, Italy
Additional Images Click an image to view a larger version

Your current search criteria is: Object is "View of Venice".