A Bearer of Good Wishes: Fragment of a Taoist Wall Painting 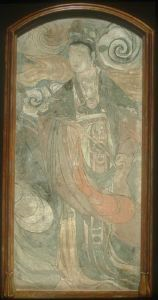 A Bearer of Good Wishes: Fragment of a Taoist Wall Painting


Large religious scenes often decorated the walls of Chinese temples, monasteries, and shrines. This woman is from such a scene; a companionâs cut-off sleeve and hem can be seen at the lower left. The only other clue to her identity is her distinctively shaped staff. It is called a ju-i, which means âfulfilling oneâs wishes.â Used by Chinese scholars as a lecturing pointer in the 4th-6th centuries, the ju-i was said in one humorous ancient commentary to have taken its shape from back-scratchers and its name from the satisfaction of relieving the itch! By the time of this painting, however, the staff had become purely symbolic, representing longevity and well-wishing.

Your current search criteria is: Object is "A Bearer of Good Wishes: Fragment of a Taoist Wall Painting".