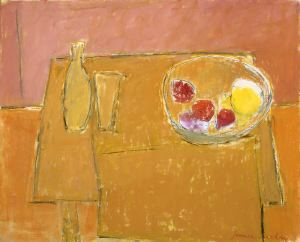 
James Lechay played a notable role in the tradition of avant-garde painting in New York City, where his circle of friends included Milton Avery, Mark Rothko, and Arshile Gorky, and later in the Midwest, where he taught at the University of Iowa for nearly three decades. âA serious painter is what I like,â he said in an interview in 1995 at the age of 89. âWhether I like his work or not has nothing to do with it, but I like the fact that heâs serious and struggling and trying to find something. A carefully done, precise, boring rendition copy, that shows no search, Iâm not interested in that, and I donât think that goes anywhere. But the person who has all the wonderful mistakes of a human being, his work is wonderful because it has wonderful errors in it, itâs full of life. I mean that a cadaver is perfect, it doesnât make any mistakes, but itâs also dead.â

Your current search criteria is: Object is "Table with Roman Colors".