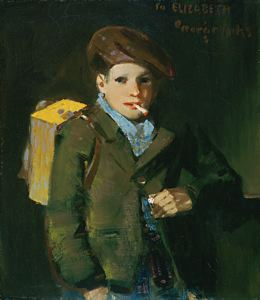 
This painting of a shoeshine boy is a part of a series Luks made of young boys who worked on the streets of New York.
[Gallery label text, 2007

Luks, like Glackens, was originally from Philadelphia and moved to New York City in 1896. He was one of The Eight who exhibited together at Macbeth Gallery in 1908, and his painting of a boy with dice reflects his interest in depicting aspects of life in the lower classes. Here, a boy who looks to be no more than ten is smoking, more than likely earning his own living as a shoeshine boy, and supplementing his income by gambling.

Exhibition List
This object was included in the following exhibitions:
Bibliography
This object has the following bibliographic references:
Portfolio List Click a portfolio name to view all the objects in that portfolio
This object is a member of the following portfolios:
1900 - 2000
20th Century American Art
All Paintings
Ashcan School
Children
Portraits
Seeing America
Web Links See links to web pages and lesson plans
Seeing America Inservice Materials from a teacher in-service presentation Spring 2008
Seeing America Chapter on George Luks' Boy with Dice, written by Bruce Weber.

Your current search criteria is: Object is "Boy with Dice".